Join Live Happy contributing editor Susan Kane in this ongoing series as she experiences three months of expert coaching to improve communication with her teenage daughter. 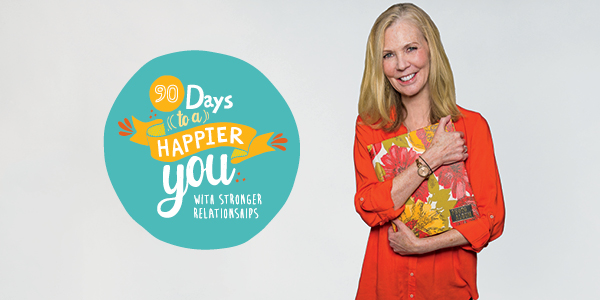 As part of Live Happy’s special series 90 Days to a Happier You, we’ve gathered experts from around the country with unbeatable advice about how we (and you!) can change habits and live better in 2016. Below is part one of Susan Kane’s ongoing blog series as she attempts to have healthier, more productive conversations with her teenage daughter—with the help of coach Michele Gravelle.

My coach, Michele Gravelle, is an expert on how two people who are having a difficult time communicating can get better at it. My issue is with my teenage daughter, Coco. Seemingly overnight, my delightful girl has become … less delightful. She’s clearly not thrilled with me, either. I know Coco still loves me, and not just in that deep-down way a mother knows. She still confides in me about important things. But too much of the time, we’re fighting.

Down in the teen trenches

I’m an older mom, so most of my friends' kids are already done with college, and our family also just moved to a new city about a year ago. This means I don’t have any mommy pals who are in the trenches with me. So one of the first things Michele suggested I do was to look online for sites where other mothers of teenagers compare their experiences and share advice.

Eye-opening doesn’t begin to describe the information I gleaned after just a few hours of Googling around about difficult teens. My child isn’t skipping school or drinking or shoplifting like so many of the kids described by heartbroken parents. I got some basic intel on what behavior is typical vs. problematic, and Coco is clearly just a normal teenager. I’m one of the lucky moms!

Still, the contemptuous way Coco speaks to me has me perennially angry and stressed out. When I come home from work and greet her warmly, she responds, “I’m busy,” or, “What do you want?” If I try to relate to her then and say something about the song on the radio being pretty, she’ll say, “No it isn’t!” That’s when I get my dander up: “Coco, don’t you speak to me in that tone!” And we’re off to another bumpy night.

When I described this scenario to Michele, she asked me what Coco was doing when I came home to greet her. That’s a time she’s listening to music and writing her stories and poems, I said (Coco wants to be a writer). Michele told me I needed to break the cycle of behavior Coco and I had gotten into. She suggested I say something like the following after Coco tells me to butt out: “Coco, I can see you’re busy now, but I’d love to connect with you later. Let me know when you have some time to talk.” I must admit I was dubious about how effective this tactic would be, but I tried it.

In the two nights after I implemented that one small change, there was a huge difference. I responded as Michele suggested to Coco’s rebuffs, got out of my work clothes and relaxed a bit. We met as a family at dinner. And to my astonishment, my teenager sought me out both nights after dinner—once just to talk about her day and once about some trouble she’s having with a friend. I was so happy, and for the first time in a long time, I’m feeling really hopeful.

Does this blog strike a chord with you? Read Susan's coach Michele's 6 Steps to Healthier, More Productive Conversations.

Also, tune in and listen to Michele Gravelle's podcast about communicating with loved ones, available here.

And come to our Facebook page to join in the conversation.

Susan Kane is a contributing editor at Live Happy.