The surest way to increase your joy is to give it away.

Diane Pollard’s job in financial services paid well, but sitting behind a desk to improve the company’s bottom line left her marginally fulfilled. “I was scared that I had only so many years left of living,” Diane says. “I thought, Wouldn’t it be sad to always take but never really give something back?”

A seasoned volunteer, Diane had long recognized the satisfaction she received from helping others and desired to find similar work full-time. A family trip to Jamaica provided the impetus. When a major accident forced Diane’s bus to detour into the hillside, Diane was unknowingly en route to her destiny.

“The bus stopped in a town, and a young boy emerged from a two-room humble abode wearing just underwear,” Diane recalls. She waved as the youngster approached the bus and raised his tiny arm to press his hand against the glass opposite hers. “I’ll never forget how his eyes locked on mine,” Diane recalls. “He really wanted to see us and to be seen.” 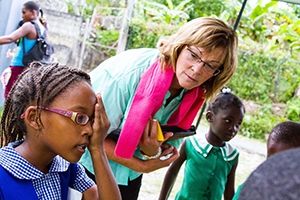 Haunted by memories of the little boy and consumed by a desire to alleviate the poverty she’d seen, Diane contacted numerous Jamaican agencies seeking a humanitarian partner. Finally her cold calls led to a warm heart: Alex Ghisays, a public relations director at Couples Resort. Diane and Alex worked together via emails, with Alex relaying needs and Diane mailing much-needed medical and educational supplies. As others began to hear about Diane’s efforts and wanted to help, Couples Resort founded the nonprofit Issa Trust Foundation, dedicated to improving health and education for needy Jamaican families. Today as Issa’s president, Diane works full-time with numerous volunteers. Programs vary from week-long medical initiatives focused on pediatric medical and vision care to educational measures, such as a recent donation of 10,000 books, 1,000 of which went to a school serving underprivileged kids with just a 61 percent literacy rate.

“I feel so fortunate that my volunteer work led to living my dream,” Diane says. “It’s an experience that really gives that inner happiness. It’s fulfilling and humbling and contagious.”

Volunteering takes time and energy—both precious commodities. But there are also huge dividends. Those who give back have a chance to connect positively with people, gain new skills, find meaning in their life, even improve their mental and physical wellbeing. (Studies show that those who willingly give reduce their stress or depression, while also lowering their risk for Alzheimer’s and heart disease.)  In fact, volunteers are among the happiest people in the world. 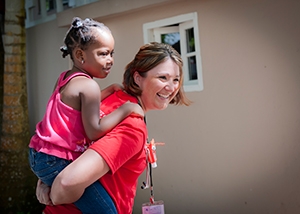 That doesn’t surprise fourth-year pharmacy student Kelsey Bayliss, who recently experienced the benefits of volunteering with Issa. She had heard positive things about the organization from her preceptor, so when her school offered rotation experiences in other countries, she simply thought: Why not give it a try?

The experience proved life-changing. As Kelsey’s medical team saw nearly 900 children in five days, she witnessed firsthand how badly the kids needed medical resources and how grateful the parents were. “I have never felt as empowered and fulfilled as during my time volunteering in Jamaica,” she says. “I don’t think it’s even possible to put into words how much that experience changed my way of thinking, way of living and future career as a pharmacist.”

The mere realization that her skills and knowledge could make a dramatic difference was huge for Kelsey. “It’s something I didn’t think about or feel before, but now I’m excited knowing that I will continue work like this the rest of my life,” she says. “If I can’t donate time, I’ll donate knowledge and resources.”

There were character-building lessons, too, such as learning to be more grateful and to rethink things that were previously deemed important. Kelsey also learned the virtue of patience. “Seeing hundreds of people wait for hours without anyone complaining was humbling,” she recalls. “Here at home, we’re antsy if we have to wait 10 minutes for a meal in a restaurant or we’re stuck in traffic. Now I wait and think, This isn’t so bad.”

Already looking forward to returning again, Kelsey is simultaneously amazed and enthused by the experience. “Volunteering gives a pure inner feeling of happiness and joy knowing that you can make a difference,” she says. “I don’t think it has anything to do with recognition or how much that you’ve helped, but just knowing that someone’s life is better because of you.”

Blaine and Jenny Moats were no strangers to volunteering when they traveled to Jamaica with Issa. Jenny, a social worker-turned-real estate agent, looked forward to engaging in humanitarian work again. Blaine, a photographer who was invited along by fellow shooter Brent Isenberger (both men’s pictures accompany this story), simply wanted to share his talents. “I had been asked to do something similar in Haiti for a different nonprofit years earlier,” Blaine says, adding that he almost didn’t go that time because Jenny had just lost her job due to funding cuts. “But I went. And when I came back I said, Oh yeah, we’re going to be OK. When I see how much we have compared to what they have, it’s pretty hard to worry.” 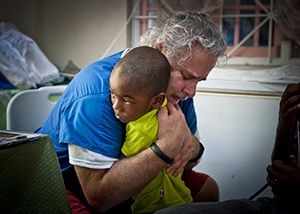 For the Moats, volunteering with their two young daughters keeps the family grounded. “The way I look at things, I don’t want to get too stuck inside myself,” says Jenny, who has introduced her daughters to giving back in ways as experiential as sleeping outside on a chilly Midwestern night to raise money and awareness for the homeless. “I want the kids to see that their life isn’t what it’s all about. There are other people who have different problems and issues.”

Though the girls did not accompany Blaine and Jenny on this trip, they pored over Blaine’s pictures, watched the videos and listened to the stories. “I think the volunteer work is reflected on them, and they have very caring hearts,” Blaine says. “When you give back to others, that’s where the happiness comes from. That’s important for us to teach our kids.”

While Blaine downplays the importance of his role compared to that of the doctors in Jamaica, he found satisfaction in using his talents and seeing the results of the team’s work. “Some of the kids came in looking pretty limp in their mom’s arms, and then they walked out with a big smile a few hours later,” he says. “That’s pretty cool.”

For her part, Jenny painted fluoride treatments on children’s teeth. One interaction with teenage girls who were helping her treat their younger sibling’s teeth left a particularly strong impression. “They were pretty cute, and I asked what they wanted to do when they were older,” Jenny says. “One didn’t know, so I said Well, maybe you could be a dentist since she was painting the teeth. You never know how what you say might change someone’s course of life, but it’s good to always keep that in mind.”

Word of mouth convinced nurses Kerri Cook and Sue McConville that joining Issa’s medical team would be the perfect volunteer opportunity to utilize their skills and passions. “If you’re able to do something you love where help is needed, that makes it fun because it interests you,” Sue says. “But it’s also very, very rewarding.”

Finding a satisfying volunteer fit also ensures that you’ll want to continue. Case in point: Kerri recently returned from a third trip; Sue just finished her inaugural trip and is eager to go again. “It is awe-inspiring,” Kerri says. “Being able to help people who really need the help gives me that ‘ahhh’ feeling. It makes me feel so good to help others who need it so much.” 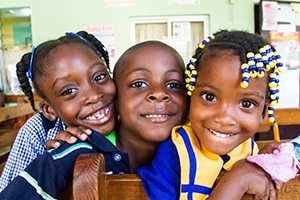 Among the lessons learned, Kerri and Sue say they’re more grateful than ever before. “We have no idea how blessed we are,” Kerri says. “I saw people come to the clinics at six in the morning and wait patiently for hours with never a complaint.” Attending to the children, the nurses were also reminded that basic health care is not a given. “I spent three and a half hours helping clean and bandage the open wounds of a girl with severe eczema,” Kerri says. “That struck me because it’s such a simple treatment in the U.S., but they didn’t have the resources to treat her, and she could have died.”

The experience has impacted the women’s professional life, as well. “It makes me a kinder person and more compassionate in my nursing job,” Kerri says, noting that she now summons the same feeling of satisfaction that she had in Jamaica by reminding herself that being a nurse makes a difference here, too.

Sue agrees. “I’m so grateful to have a job, car and house,” she says. “I don’t stress about the little things anymore after what I saw. I don’t think they’re very important.”

Instead, she focuses on positive little things she can do daily to help others—things like donating books to a literacy program, bringing an elderly neighbor a meal or chaperoning a school field trip. “The last day in Jamaica I was kind of sad because I was thinking “OK, where can we go tomorrow to help?” Sue says. “Then I realized, I can tap into those positive feelings by giving back wherever I am.”

LuAnn Brandsen is a home and garden writer and former editor of Country Gardens and Country Home. Her work can be found in Elegant Homes, Décor, Country French, Cottage Style and Tuscan Style.